Grays councillors express concerns over plans for building in their ward 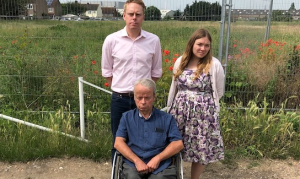 GRAYS councillors have express their concerns over plans to build in their ward.

Thurrock Council has confirmed it has identified 20 areas it is considering developing for housing including the demolition of part of its own civic offices in Grays and the building of 82 units. Selling the units is expected to generate the revenue to cover the estimated £10 million build of a new extension on the site adjoing the High Street.

Other sites earmarked, including the Culver Centre and adjacent field and the Callan Grove open space in South Ockendon have already stirred up considerable anger and campaigns against them.

Several car parks are identified in Grays town centre as being under used and available for development, including part of the Thurrock Adult Community College.

Cllrs Kerin, Pothecary and Fish said: “We are concerned about the proposal to reduce car parking for Grays Beach. We believe that this shows a lack of ambition for the area.

If we are to encourage visitors to the area, we need a full and accessible car park. These plans could disincentivise people from making the visit.

Grays Beach has the potential to be great – for this to happen, please need to be able to park there as conveniently as possible”

In Orsett an existing number of homes on Ridgewell Road would be demolished and replaced.

In total the housing development option sites would produce up to 926 new homes. They will be built by the Council (through the Housing Revenue Account) or by its wholly owned company,Thurrock Regeneration Limited.

The report to the meeting says: “The list of site options will enable the Council to have greater focus and work more efficiently towards delivering the housing development targets as time will be spent on sites that are agreed, rather than reacting and working on sites that may be abortive.

“The list of site options will then be explored further to establish their suitability for development, subject to the appropriate levels of engagement and consultation with stakeholders and communities.”

A list of the twenty schemes can be found below.