VE Day is here: Thurrock gets set for a lockdown celebration 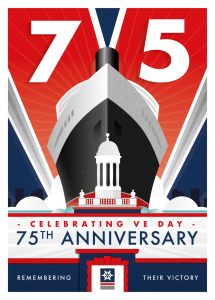 IT is VE Day and Thurrock looks all set for a celebration to mark this important day in our history.

There has been a constant theme of red white and blue and memories of the Second World War going up across the borough with many people preparing bunting and flags ahead of the 75th anniversary.

Thurrock’s Anita Hayward is just one of the borough’s residents who has gone an extra mile with her commemorations.

Her classic car, adorned with VE Day flags (see picture below), has already received plenty of praise on social media and it is set to hit the streets of Thurrock on the special day.

Anita posted this message on social media yesterday (Thursday 7 May): “Tomorrow is the 75th anniversary of VE Day.

“Our Jensen Interceptor is ready to go. Anybody with a classic or vintage car fancy having a drive past around Stanford and Corringham for the people out the front of their houses celebrating.”

Throughout VE Day Thurrock Council will be sharing social media posts marking VE Day including nostalgic pictures of celebrations which took place in the borough 75 years ago.

A speech and reading by Mayor and Deputy Mayor – who will be laying wreaths at Stanford-le-Hope and Grays respectively, will also be shared on social media channels.

The council will be using the #VEDay75 hashtag for these posts (see image below).

The national commemorations taking place on VE Day include:

– Two special programmes on BBC One
– A two-minute silence of remembrance at 11am
– The ‘Nations’ Toast to the Heroes of World War 2’ at 3pm – A chance to stand at home and raise a glass of refreshment of your choice to toast – “Those who gave so much, we thank you”
– A pre-recorded televised address from Her Majesty The Queen at 9pm.

The article takes a look at the fascinating role the port and Tilbury played in the war.

We at YourThurrock were lucky enough to be sent some incredible photos to go along with the piece – all of which are courtesy of the Thurrock Museum and Tilbury Riverside Project unless where otherwise stated.

Read the story of Tilbury in World War II here.