Man slashed with knife during attempted robbery in Grays 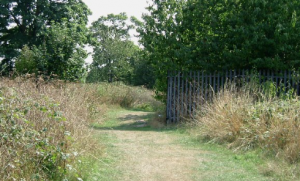 ESSEX Police are investigating an attempted robbery of a man in Grays.

The 21-year-old man was approached by two men in Hangman’s Wood, near the Esso Garage on the Daneholes Roundabout, at 11.10pm on Thursday 7 May.

One of the men had a lock knife and demanded his wallet and mobile phone.

When the victim said he did not have any, he was slashed with the knife on his arm and stomach. He managed to get the knife off the first suspect and both men ran off.

A police spokesperson said: “We have been carrying out enquiries and we believe there were people in the area who may have seen these two men.

“The first was described as white, about 5ft 9ins tall and of medium build. He had deep set eyes and short brown hair. He wore gloves, a black zip up tracksuit jacket with a reflective logo on the left side of the chest and matching tracksuit bottoms. His face was covered with a dark scarf.

“The second man was described as white, about 6ft tall and of medium build. He wore a black hooded jumper with a logo on the left side of the chest, jeans, black trainers and gloves. His face was covered with a black scarf.

You can also report online at https://www.essex.police.uk